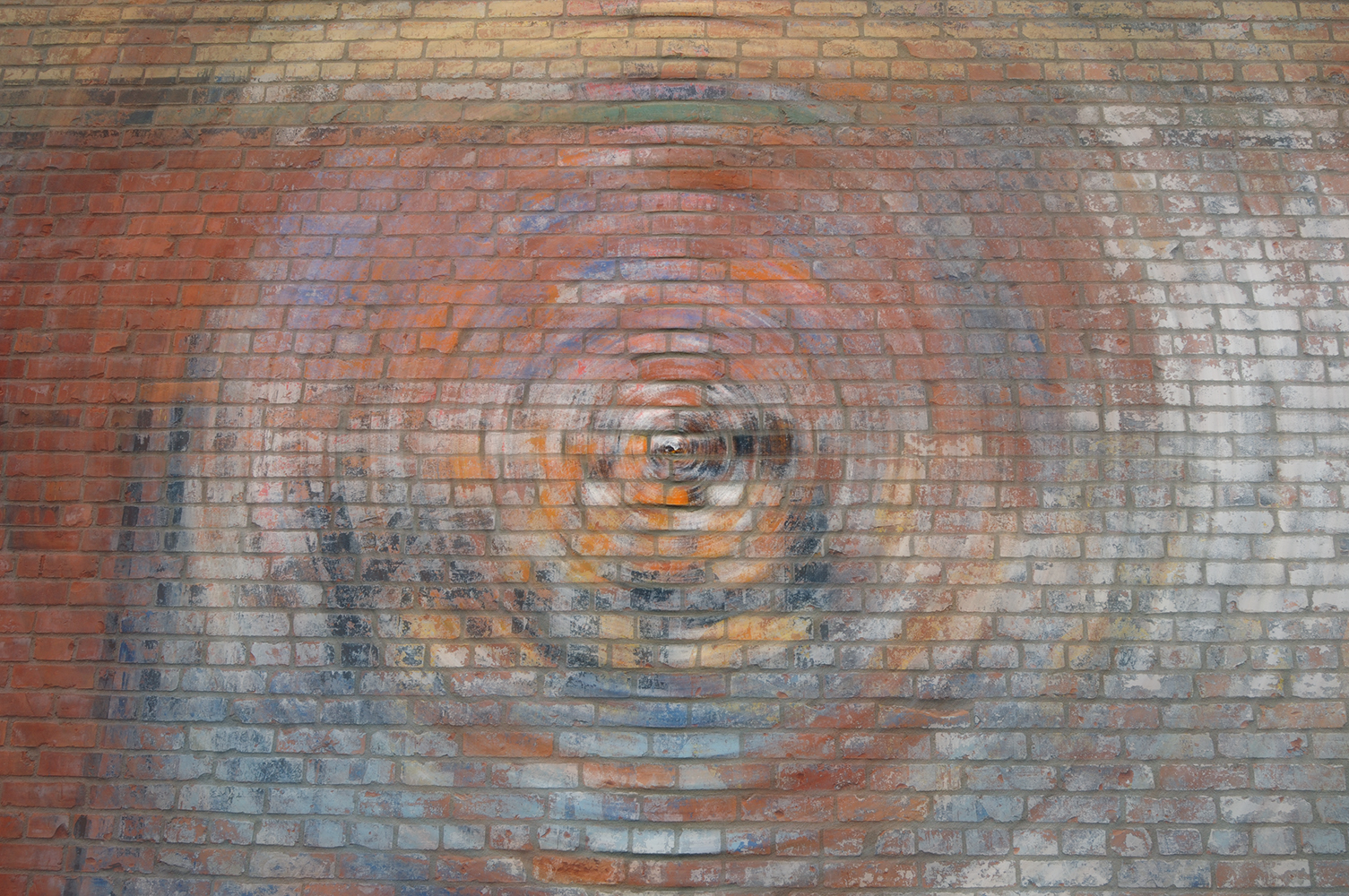 I bought a painting in Seattle

Wandering around Seattle, taking pictures of interesting colors and textures and patterns, thinking about the mandalas they would create, I happened on a stack of paintings in front of a coffee shop.  The artist was in the process of hanging them.  I was drawn to the paintings and enjoyed talking to Winston, the artist, about them.  My sister finished her appointment at the acupuncturist and met me at the coffee shop to see the paintings.  We could have spent hours talking with Winston, but his wife, the task master, was trying to get the paintings up before her parking meter ran out.  (Every artist needs a task master!  We can all get easily distracted when talking about our art, where each idea came from, what it means, what was the process, and so on.  But I’m trying to get to the point of THIS story, so we’ll have to take that up on another day.)

We left Winston to his lovely task master but said we’d return in an hour to look at all the paintings after they were hung.  Wife/Task Master tried to move us to buying one – they were reasonable, most would sell out on opening night, etc. etc.  I was so close, but I wanted to see them all up on the walls.  There was one in particular I was drawn to, but it was the first one I had looked at and I hadn’t gotten a chance to see all of them for comparison.  When we returned, Task Master had beat the meter and Artist Winston was gone.  I was off the hook and didn’t feel obligated to buy a painting in order to continue the conversation.  I could look at each one, study it, feel the pulling in of this or that one.  Enjoy the process with no obligation. 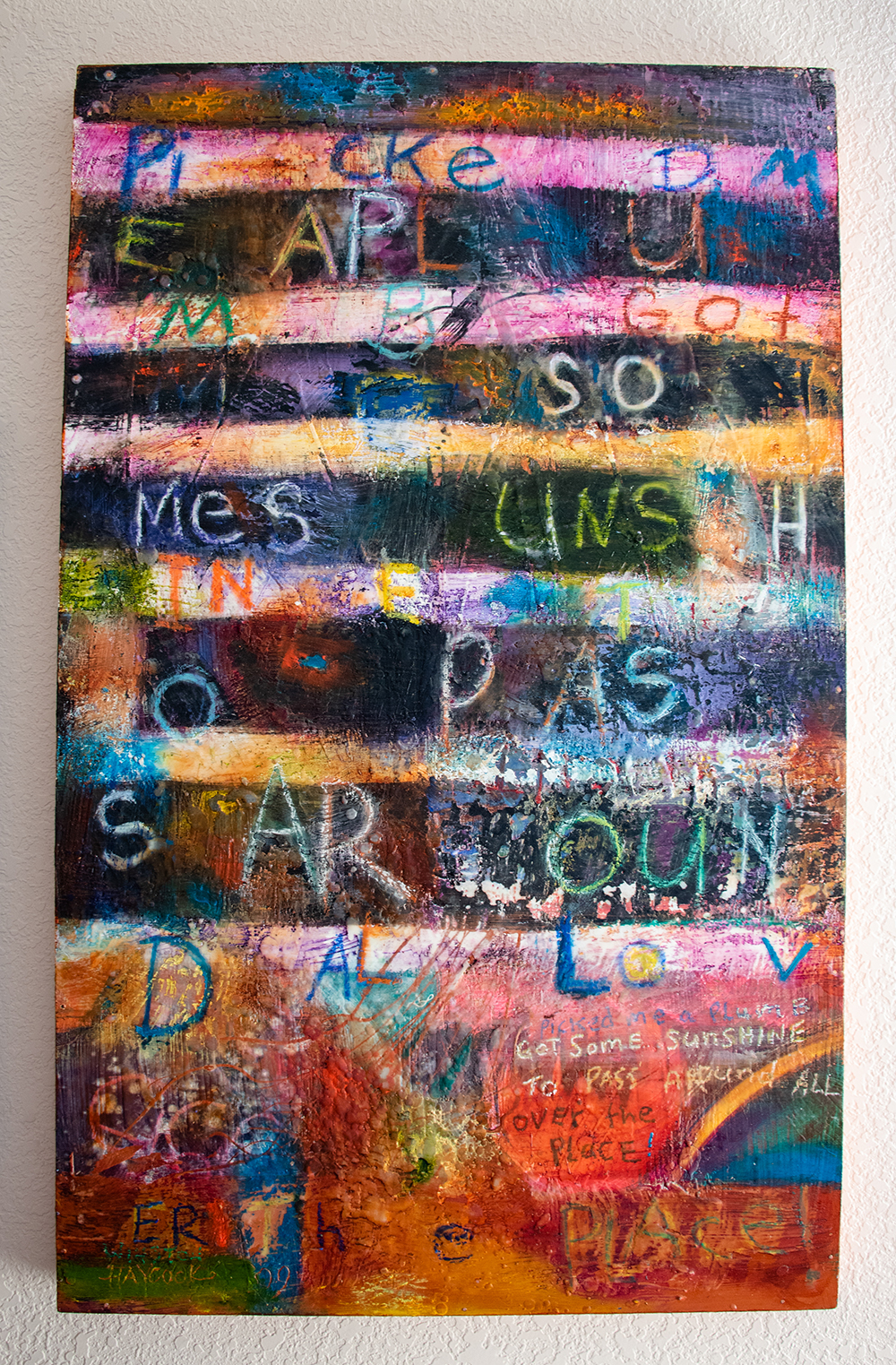 Winston is what I’d call a whimsical artist.  His paintings were fun and happy and had hidden poetry in them.  The one I was drawn to said “I picked a plum” and then something about passing sunshine all around.  Except he had spelled plum “plumb.”  That bothered me some – my sense of perfection and properness and years of editing.  But it was almost a deliberate choice to think about buying it just to challenge my sense of propriety.  Something like “In your face, Proper Editor.”  But it wasn’t easy.  I had this mini-war going on inside.  I couldn’t easily shut off years of editing and layers of grammatical training.

I waited a day to see how I would feel the next morning.  I still wanted the painting, so I called Winston.  The problem became the shipping.  When he told me how much it would cost to ship, I almost said never mind.  But maybe I could take it on the plane.  We agreed to meet at the coffee shop the next morning, I would find a place to pack the painting and would take it on the plane or ship it.  After we hung up, I checked the airline’s baggage regulations and, based on the dimensions he had given me, it would cost $150 to carry the painting home on the plane.  That made the “plumb” error bother me even more.  But I had already committed to buying the piece, so I was trying to ignore that little nag.  The next morning, I took a deep breath and bought the painting.  We went to a UPS store, and the packing and shipping ended up costing double what Winston had estimated, but still a little less than the $150 required to carry it on the plane.  I thought I had been plumb gullible and was kicking myself for impulse buying.  My sister, not a coffee drinker, bought me a giant size latte to make me feel better.  “It’s just money,” she said – she who tracks every penny because she has to.

On the plane, I pulled out The Sun magazine and began reading an article titled The Science of Happiness.  Great article.  Absolutely enthralling.  And there it was on page 11, first paragraph: “He and others argue that sorrow, melancholy, and other so-called negative emotions stimulate people to reflect deeply, to PLUMB the depths of the psyche….” (Capital letters and italics added by me for emphasis.  Sincerely, the Editor.)

I couldn’t read any further.  I grabbed my journal to write it down.  It was exactly what I have been doing – or attempting to do – plumb the depths of the psyche.  It put a whole new perspective on the painting and my interpretation of the words within the painting.  It was such a synchronistic message.  I noted it and returned to the article.  The message wasn’t finished.  “…and to generate works of art.”  I knew I had bought the right painting.

Ten years later, that painting still hangs over my reading/writing chair, the one I go to almost every morning before coffee or breakfast or shower.  It still spreads sunshine over my shoulders, into my writing, and all over the place.

(Winston Haycock is a west coast artist.  Look him up and enjoy more of his work!)

A Feather on the Beach